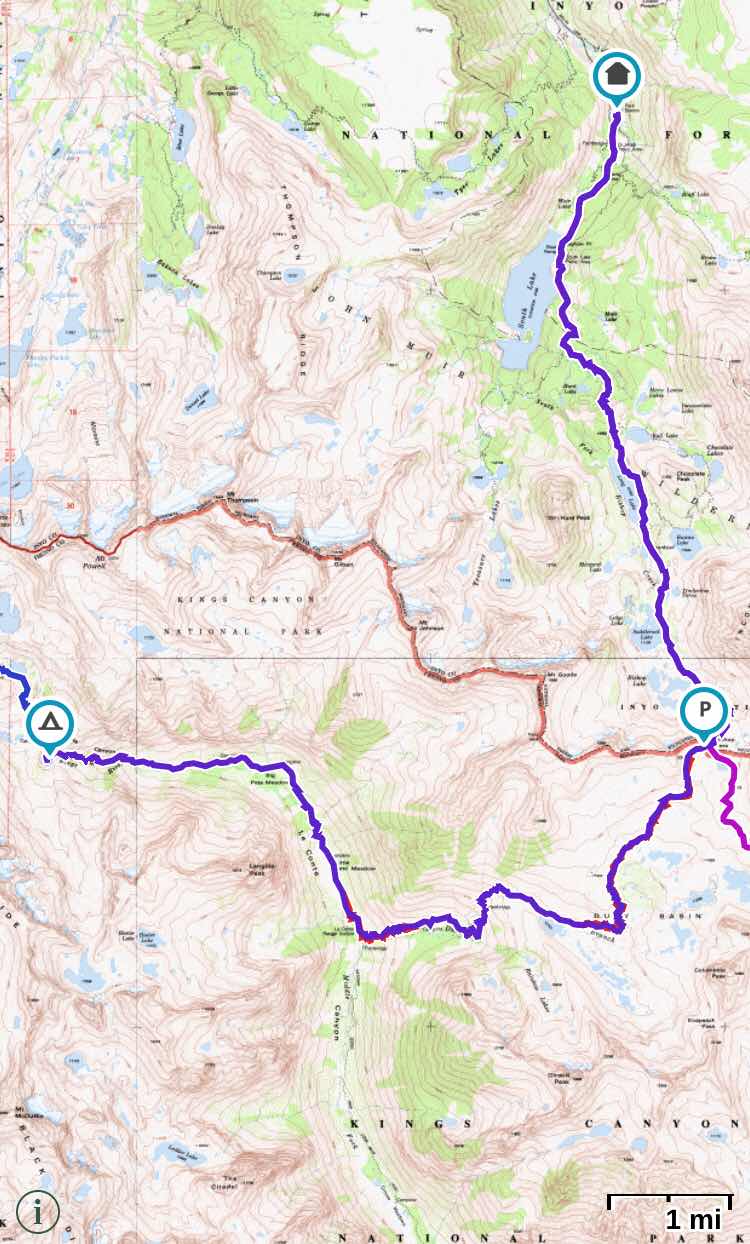 Today I was left with strong memories, not the usual “visual” kind of towering peaks and lake reflection but of “smell”. The memory from the nose. Like the smell of Picadilly cigarettes from when I smoked for 2 weeks when I was 13. Maybe it is only me, but I have far fewer smell memories than memories from what I have “seen”.

Today, though, my nose is still twitching. We started up the Bishop Pass Trail from Parcher’s Resort where we had stayed in a cabin and picked up our resupply bucket with food for the next 7 days. Up the trail we went. It was a quiet morning, beautiful reflections off of Long Lake.

We steadily climbed up towards Bishop Pass which is 6 miles up and 2,200 feet from the trailhead. Being on the trail was meditative and relaxing until about a mile from the top of the pass. Suddenly my nose was grabbed and jerked into my stomach by an awful dead meat smell. The stench of 20 dead deer. A smell memory I did not want. Deer lives that ended quickly, and all at once. An avalanche in late spring or early summer probably sent the deer plunging to their death, their bones and rotting carcasses strewn haphazardly like jig saw puzzle pieces scattered randomly on a table. I held my breath and my stomach clenched tightly trying to force the smell away from my body.

It is a smell memory I did not want but it stays with me, buzzing around my head like the flies on the carcasses.

After we topped Bishop Pass, we started down into Dusy Basin with it’s scattered boulder fields and lakes full of fish.

I recently read that many of the lakes in Sequoia  Kings Canyon National Park had been stocked with trout starting in the late 1800s. This practice was stopped in 1988 because of the decline in the mountain yellow-legged frog by 90% over the last 100 years. There is still debate over how much of this is from the introduced trout which feed on tadpoles.  The frog population decline is also attributed to pesticides, the fungal disease chytridiomycosis, livestock grazing, drought and ultraviolet radiation.

I would love to see a mountain yellow-legged frog but they are only found in seven or eight undisclosed locations so I know it is unlikely. But of course I look, and I am always convinced the frog that hopped under a rock which I did not get a good look at is the endangered mountain yellow-legged frog. Ray just smiles and rolls his eyes when I do this.
We are on a trail today and pass a few people going up to Bishop Pass. One women is impressed with how fast we are hiking as we pass her and her friend with day packs. Oh, we’ve been doing this a while, I tell her and talk about the 800-mile Hayduke route we did this spring and that we are doing the Sierra High Route which is mostly off-trail scrambling. She immediately wants to know what shoes I am wearing. My Hoka OneOne Speedgoat 2s are trail running shoes and probably no one else is recommending them for the serious talus hopping and granite-slab climbing that we are doing off trail.

But I love them and how they grip on the granite. She writes the name of them down and off we go.

Then we begin the long drop into Le Conte Canyon. We fell in love with Le Conte Canyon when we hiked the John Muir Trail in 2016. It is such a classic example of glacially-carved valley.

Glacial valleys like Le Conte tend to have a U shape with steep, straight sides and a flat or rounded bottom. If it was just formed by a river, it would be more V shaped. I feel cradled in a valley shaped by glaciers; more protected I think.

The drop into Le Conte Canyon and to the bottom of the “U” is steep and deep as we drop 3,200 feet to the valley floor below and join the John Muir Trail and Pacific Crest Trail.

For the next 4.5 miles to our camp, we join many pilgrims on the John Muir Trail, everyone searching or processing something. We pass by them or move over for people coming in the opposite direction. I feel like the shadow of a car on the highway, darting in and out, but always moving forward. We park for the night at a beautiful little lake below Muir Pass and watch a pair of green-winged teals bobbing and scooping algae off of the bottom of the lake. The two of them stick together, never more than a few feet apart. I wonder if this a survival instinct or just for comfort. 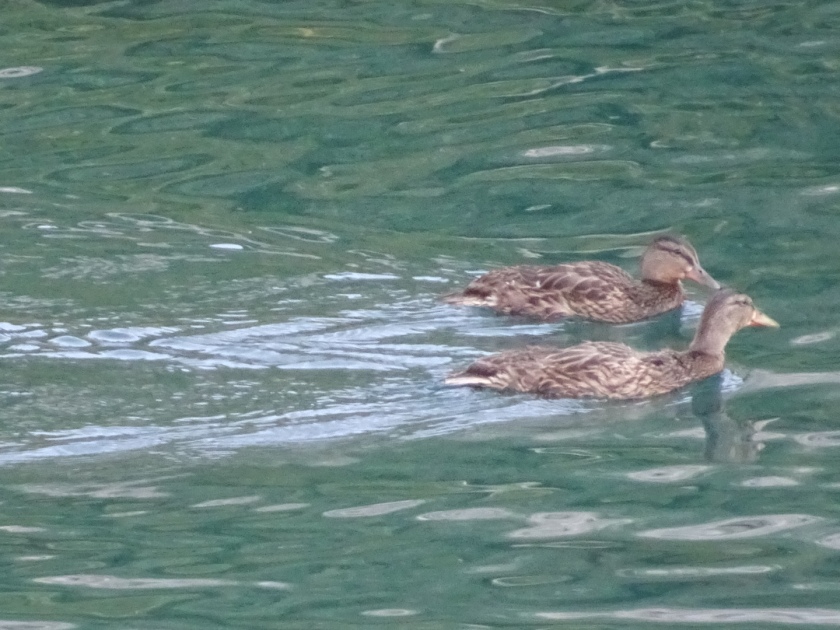