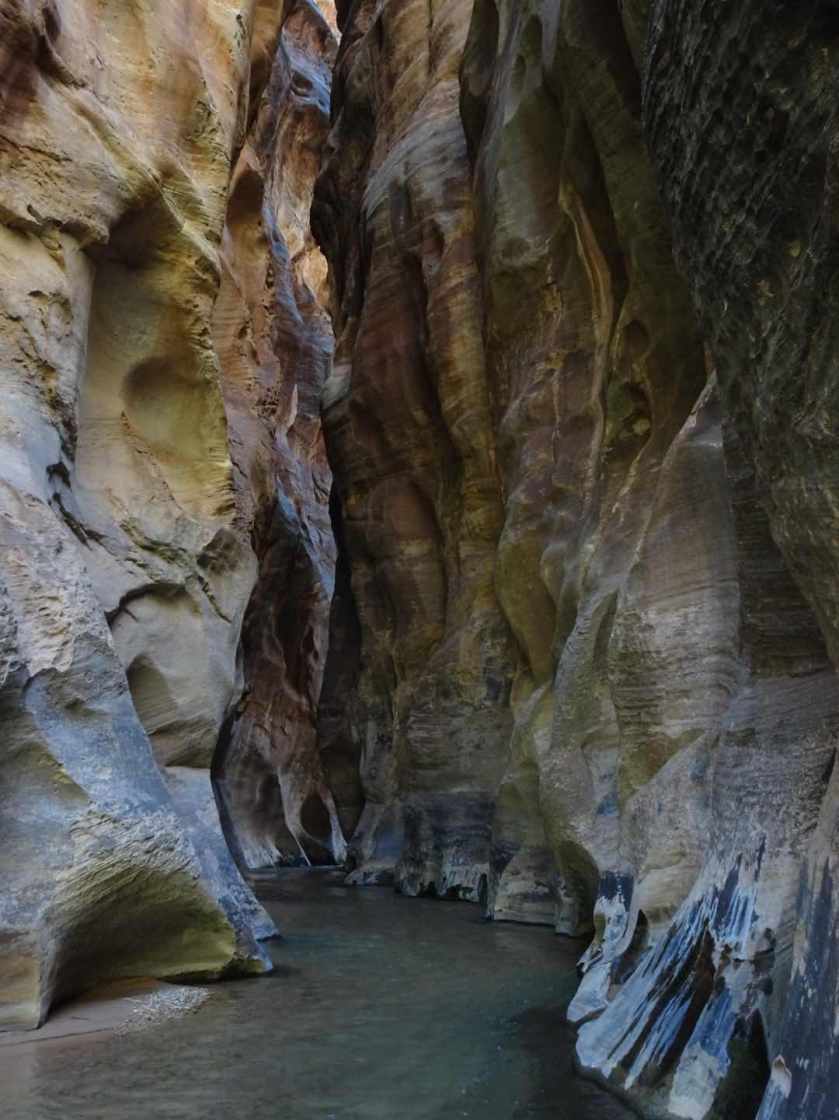 Today blew me away. You would think by now after hiking the Hayduke for two months that my aesthetic senses would be dulled, and  the sharp point of beauty and pleasure desensitized. But it is not the case as we venture into perhaps one of the most stunning yet unspoiled canyon narrows in the southwest. Today we entered Parunuweap.

We started off in the sand dunes next to Elephant Butte which is about 20 miles west of Kanab, Utah.

The cliffs of Zion stare at us from a distance. White gleaming Navajo Sandstone stained like rusted iron pipes from the Temple Cap Formation above. Zion, the promised land, is beckoning. A place where our trek will end.

But first we have to enter the abyss known as Parunuweap Canyon. We have spent a good portion of this trip wading through canyon narrows, often in cold water, and dark places. We don’t know what to expect today except we are going to try a relatively obscure way into the canyon and that the exit can be steep and a little challenging. Yeah, the Hayduke encourages alternate routes. It is almost like the trail has it’s own personality. Try it out, see if it works says Hayduke.

Our plan is to hike for about eight miles through the sand, drop into Parunuweap via French Canyon and out an exit route on the north side just past the narrows.

It takes us a little bit to find the route into French Canyon. Like a lot of canyons there is only one way in. Once we find it, we are both excited. It is like finding the secret passageway into a fantasy land. Paradise awaits.

French Canyon does not disappoint. It is a beautiful little slot with lush vegetation and clear flowing water. Ray is stopping a lot to take pictures as he always does. It is warm but we are cradled in the coolness and soft folds of undulating sandstone walls.

French Canyon coruscates and glitters off the canyon walls as it gently merges into the East Fork of the Virgin River. We are now in the Barracks, a canyon in Parunuweap that is just outside the boundary of Zion National Park. But there are no crowds here. It is simply stunning.

About a mile and a half below French Canyon we get to the only obstacle in the Barracks. It is a rockfall and logjam that has created a 12-foot waterfall. When the water is low enough it is possible to climb down the boulders and rocks but for us on this day, there is clearly still too much water to scramble down the rocks. Luckily, Jamal Green on his website “acrossutah.com” describes a bypass route to go around it when the water is high. We use this bypass and scramble up about 30 feet, and back down through a crack which gets us below the waterfall.

We are taking our time through this section and are not rushed as we have to stop before the park boundary today. We enter the narrows which some say rival those in Zion. Minus the crowds, of course. We see no one.

The canyon is very narrow – only about 20 feet across with walls the reach to heights of over 1000 feet. This place is mind-blowing – slightly sinuous, the canyon squeezes you into it’s quiet darkness. The water glows with a slight turquoise blue color and the sound of the water echoes off the walls. This place feels holy. Ray takes some amazing pictures in this stretch of the canyon.

It is in a strange place for a plaque, away from where others can see it. It sure takes a lot of effort to get to this area to appreciate that plaque and be reminded about what John Wesley Powell accomplished. John Wesley Powell did the first Parunuweap traverse by a European and named the canyon “Parunuweap” which means “roaring water canyon” in Paiute.  But I am surprised that whoever placed the plaque put it here, in 1972, which means even less people were here and knew about this place.

Near the plaque is our exit route out of the canyon. We have chosen to take the option described by Jamal Green in “acrossutah.com” as opposed to the traditional Hayduke route which climbs out of the Barracks via a steep gully just downstream of Misery Canyon. I am glad we did as we would have missed the prettiest stretch of narrows.

We make our way up the exit route. At one point, I take my pack off and pass it up to Ray as I need all my hands and feet on the rock and don’t want my pack pulling me back. Other than that, the route is fairly straightforward.

Once out of the canyon, we hike to the boundary of Zion National Park and set up camp. Route finding is a little confusing through this area as there are a number of people and animal trails that start and peeter out. Hard to believe this is our last night “on the trail” I think to myself as I drift off to sleep.